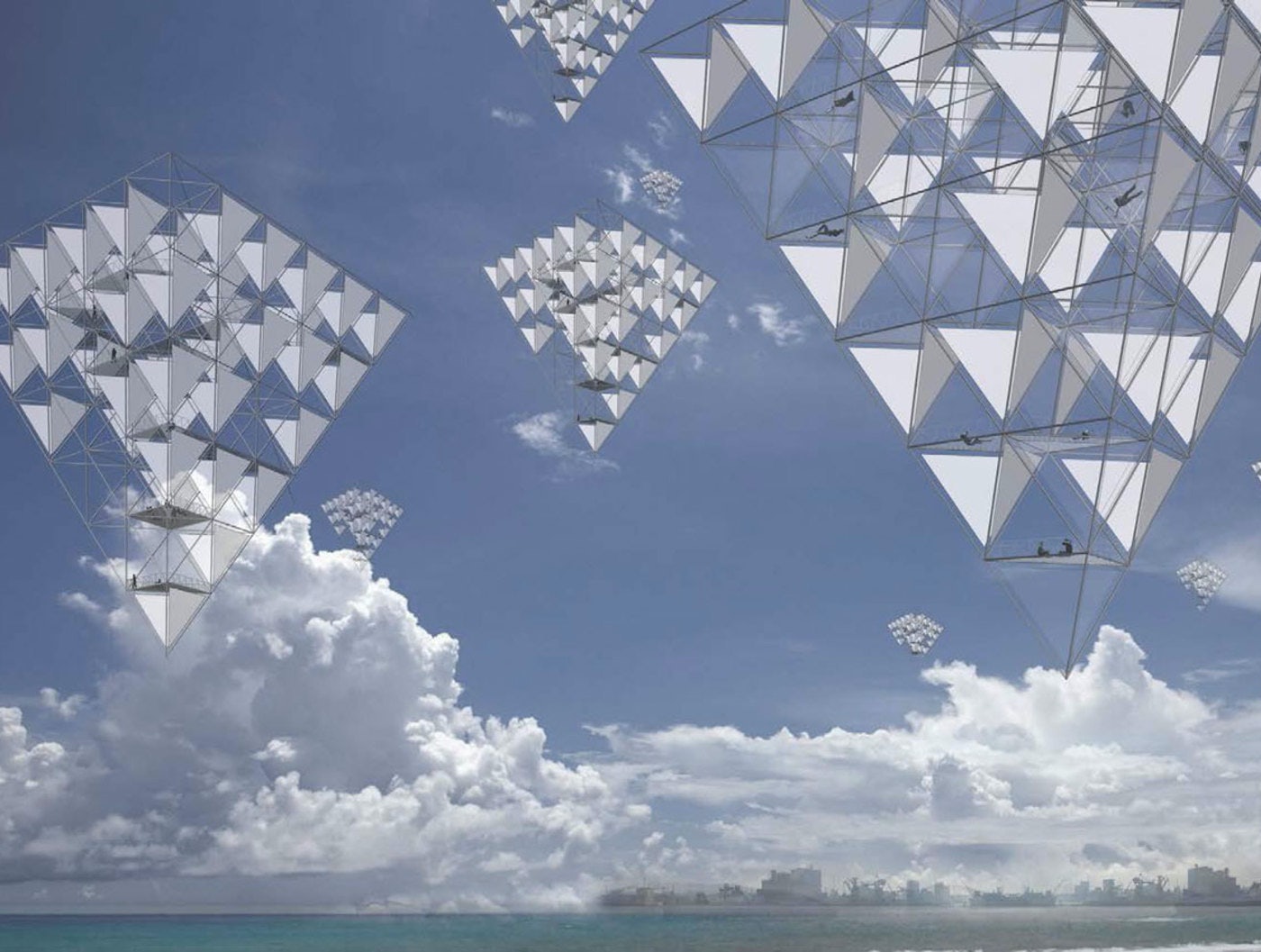 The artist talk for CAC Members on Saturday has been moved back to 3PM.

The Contemporary Arts Center in Cincinnati (CAC) has commissioned new work by the innovative artist Tomás Saraceno who develops ambitious projects including models for cities that float on air. On view June 18, 2016, through June 2017, the installation comprises a series of pyramid-shaped, kite-like structures suspended from the CAC's spacious lobby.

This aspect of Saraceno's practice that joins art, architecture, and science is based on work conducted by Alexander Graham Bell, the inventor of the telephone and tetrahedral kite frame construction, during his early investigations into manned flight. Saraceno draws on Bell's studies and his own experience as an artist, architect, and artist-in-residence at NASA's International Space Studies Program to create outsized kites constructed with light-weight carbon fiber tubing and flexible solar panels. When the wind takes the structures aloft, the paper-thin solar panels function as sails. The artist envisions these structures as models for flying observation towers or public plazas and, eventually, cities in the sky.

The CAC installation is based on a previous Saraceno work, Solar Bell, 2013, a structure capable of being lifted by the wind using the latest technology in lightweight materials and sustainable energy. Solar Bell was the final project in the series of artworks created in conjunction with the expansion of the port of Rotterdam. Saraceno's response to the land reclamation project was to create a model of a new utopia that floated above the city.

For the CAC installation, the artist created whole and partial tetrahedrons using the materials and principles of Solar Bell. The new work responds to the surrounding architecture in the Zaha Hadid-designed museum building. Saraceno's sculptures are both meditations and potential prototypes for floating, portable alternative environments to address humanity's real problems like overcrowding and diminishment of natural resources. The installation further resonates with Hadid's vision of CAC's lobby as a utopian communal space.

The reflective surfaces capture and mirror viewers, passersby, and architecture, making them an element of the artwork and stimulating conversation about the future of urban expansion and human settlement.

CAC Director Raphaela Platow said, "Tomás Saraceno and the late Zaha Hadid are visionaries of extraordinary breadth, and we are delighted to bring them together here. Building on CAC's vibrant role in the community, we are proud to present new work by an artist of Tomás' stature. Thanks to new commissions, free admission, and robust public programing, our refurbished lobby has become the vibrant contemporary cultural plaza that Zaha intended, a place in downtown Cincinnati to celebrate art, architecture, ideas, and community."

Tomás Saraceno is an internationally recognized artist with an architecture degree from Universidad Nacional de Buenos Aires in Argentina. An artist trained as an architect, Saraceno deploys insights from engineering, physics, chemistry, aeronautics, and materials science in his work. His floating sculptures and interactive installations propose and explore new, sustainable ways of inhabiting and sensing the environment. In 2009, Saraceno attended the International Space Studies Program at NASA. The same year he presented a major installation at the 53rd Biennale di Venezia, and was awarded the prestigious 2009 Calder Prize. Saraceno's work has been shown in international solo and group exhibitions at Palais de Tokyo, Paris (2015), Metropolitan Museum of Art, New York (2012), Kemper Museum of Contemporary Art, Kansas City (2011-12), and Hamburger Bahnhof, Berlin (2011-12).