Marjolijn Dijkman’s (b. 1978 in Groningen, The Netherlands) approach employs scientific methods and imaging technologies to bring underlying socio-political structures and their environmental entanglements to light. Operating in the space between fact and fiction, and abstraction and speculation, she creates films, performances, objects, and photographs that challenge the ideological and cultural dominance of Western science. Earthing Discharge is an extension of the artist’s research into the history of electricity and the environmental impact of contemporary energy storage. By documenting materials linked to what may become one of the largest lithium mines in the world in Manono in the Democratic Republic of the Congo, Dijkman comments on the ecological fallout generated from mining this valuable mineral and the toxic electronic waste produced as a result of the rise of green energy.

For this commissioned wallpaper, Dijkman creates a collage comprised of photographs depicting items associated with technology and energy use —minerals, circuit boards, and personal devices. Arranged across our 40-foot lobby wall, the images are rendered in high contrast, emphasizing the objects’ electrical fields and radiant glow. Dijkman’s labor-intensive process involves activating the conductive matter using high voltage electricity and photographing them through heat conductive glass similar to what is used in smartphones. The resulting blue and purple halos and irregular linear rays, a phenomenon known as corona discharge, is caused by the ionization and electrical disturbance of adjacent air. The photographic collage makes visible electric currents that we rarely see, calling attention to the systems of extraction that support most of the world’s modern energy, communication, and mobile computing technologies.

Marjolijn Dijkman was born in 1978 in Groningen, The Netherlands. She received her BFA from the Gerrit Rietveld Academy, Amsterdam (2001), and held post-graduate positions at the Piet Zwart Institute, Rotterdam (2003), and Jan van Eyck Academy, Maastricht (2006-07). Her work has been featured in numerous international exhibitions at institutions including the Sharjah Biennial (2007); Berkeley Art Museum and Pacific Film Archive (2010); Marrakech Biennial (2012); Museo Tamayo, Mexico City (2014); Institute of Contemporary Arts, London (2015); Shanghai Biennial (2016); Palais des Beaux-Arts, Brussels (2017); and Sydney Biennial (2018), among others. Dijkman is one of the founding members of Enough Room for Space (2005-present), a collaborative arts initiative centered on projects and discussions that respond to pressing social, political, and ecological issues. She currently lives and works in Brussels.

This exhibition is supported by the Kaplan Lobby Fund. Additional support was generously provided by FotoFocus and the Mondriaan Fund. This program is also supported in part by the Dutch Culture USA program by the Consulate General of the Netherlands in New York. Earthing Discharge is part of an ongoing collaborative project, On-Trade-Off (2018-present), initiated by the artist initiatives Picha (Lubumbashi, DRC) and Enough Room for Space (Brussels, BE). 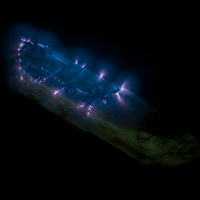 The Kaplan Lobby Fund
You Belong Here. Join Today!See What's New in our StoreAdmission is Now Free for All!