A Thread of Light

add to calendar
A Thread of Light
close

Working with installation, sculpture, photography, and video, Kader Attia examines the symbiotic relationship between colonizer and colonized, oppressor and the oppressed. Attia’s research-based practice focuses on understanding the individual, national, and societal wounds shaped by Western imperialism and its aftereffects. A Thread of Light (2019) is a nine-minute video wherein Attia explores his personal family histories of trauma through the childhood recollections of his mother. Refusing to depict these untold sufferings with images or articulate them verbally, her memories are instead mediated through the artist, who incises them, word by word, into black scratchboard.

Many of Attia’s videos rely on an interview structure to shed light on the personal accounts of persecuted and displaced populations. In the film, Héroes Heridos (2018), for example, Attia used first-person narratives of immigrants and activists to document the plight of asylum seekers, shedding light on issues related to citizenship, migration, and political nativism. However, while Attia has interviewed and filmed his mother for more than 20 years, A Thread of Light withholds that archival material. Rendering her story with text alone, Attia rejects showing her likeness, questioning the conventions of representation itself. The film's abrasive soundtrack, which alternates between silence and intense scraping, references the repeated acts of transgression performed by his young mother, as she scratched away the black paint her caregiver had applied to all windows in the house where she was raised. Although a minor offense, her gesture serves as a symbol of resilience and resistance against gender-based violence and the silencing of victims of abuse. Attia’s video is a censure against structures of oppression and a testament to the limits of image-based modes of visibility.

This exhibition is supported by the CAC Exhibition Fund. Additional support is provided by the National Endowment for the Arts. 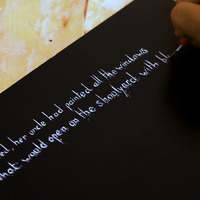