Curated by Kate Bonansinga, Director, School of Art in the College of Design, Architecture, Art, and Planning in collaboration with Amara Antilla, Senior Curator at the Contemporary Arts Center.

Tania Candiani’s artistic practice spans sculpture, sound, film and performance to examine innovations of the past and present. Often responding to specific sites and local histories, she reanimates forgotten narratives, protagonists, and material traditions in order to honor the human labor invested in social change, and to poetically call for a more just and inclusive future. For the past two decades, she has focused on examining the breakthroughs and failures of dominant cultural, economic, scientific, and technological structures. Whether commenting on US-Mexico border law, gender inequality, scientific theory, or workers’ rights, she creates objects and actions that provoke empathy, critical nostalgia, and reflection on the commodification of time, land, and labor.

Produced over the course of two years and several visits to Cincinnati, Sounding Labor, Silent Bodies features historical visual ephemera alongside a new suite of artwork that examines the contradictions present in the rhetoric of progress that accompanied America’s industrial past. Often mediated through the body, Candiani’s work recognizes the politics of voice and insists on the expressive potential of repetitive movement forming what the artist calls “a choreography of labor.” The centerpiece of the exhibition is a three-channel film featuring a women’s choir reciting the sounds of disappearing forms of manual work. The resulting a cappella music, which recalls pouring, squealing, cutting and hammering, echo through the galleries as a requiem for four industries that dominated Cincinnati’s workforce in the late 19th century. Sounding Labor, Silent Bodies highlights women as a corrective to dominant historical narratives that excluded their role as factory workers, and suggests parallels with current struggles against gender inequality. 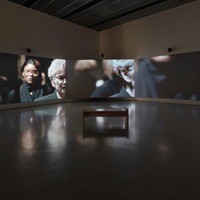