Scottish photographer Graham MacIndoe has been photographing, envisioning, revealing, and documenting the evolving visual identity of the rock band The National well before they were The National. Since 2002 MacIndoe has accompanied the band at formative moments of their ascendant career, picturing the trajectory of The National as both men and musicians as he contributed to the images that picture their spirit and sound. This exhibition will celebrate a handful of iconic photos from an inventory of thousands, focusing especially on the production of the quintet's most recent, and now Grammy-award winning release Sleep Well Beast. In concert with their 2018 Homecoming, this carefully selected group of works will showcase MacIndoe's sensitive eye for the moments that underpin the music and inject life into the mythology.

Graham MacIndoe studied painting at Edinburgh College of Art and received a master's degree in photography at the Royal College of Art in London. He is an adjunct professor of photography at Parsons The New School in New York City as well as a working photographer. Graham’s photographs have appeared in many newspapers and magazines, including The New York Times, The Guardian Weekend Magazine, New York, The Financial Times Magazine, Harpers, Fast Company, W, Details, I.D., Vice and Esquire. 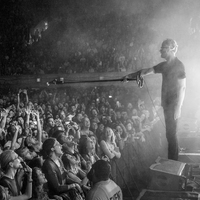