This Time Tomorrow festival returns with performers from around the world 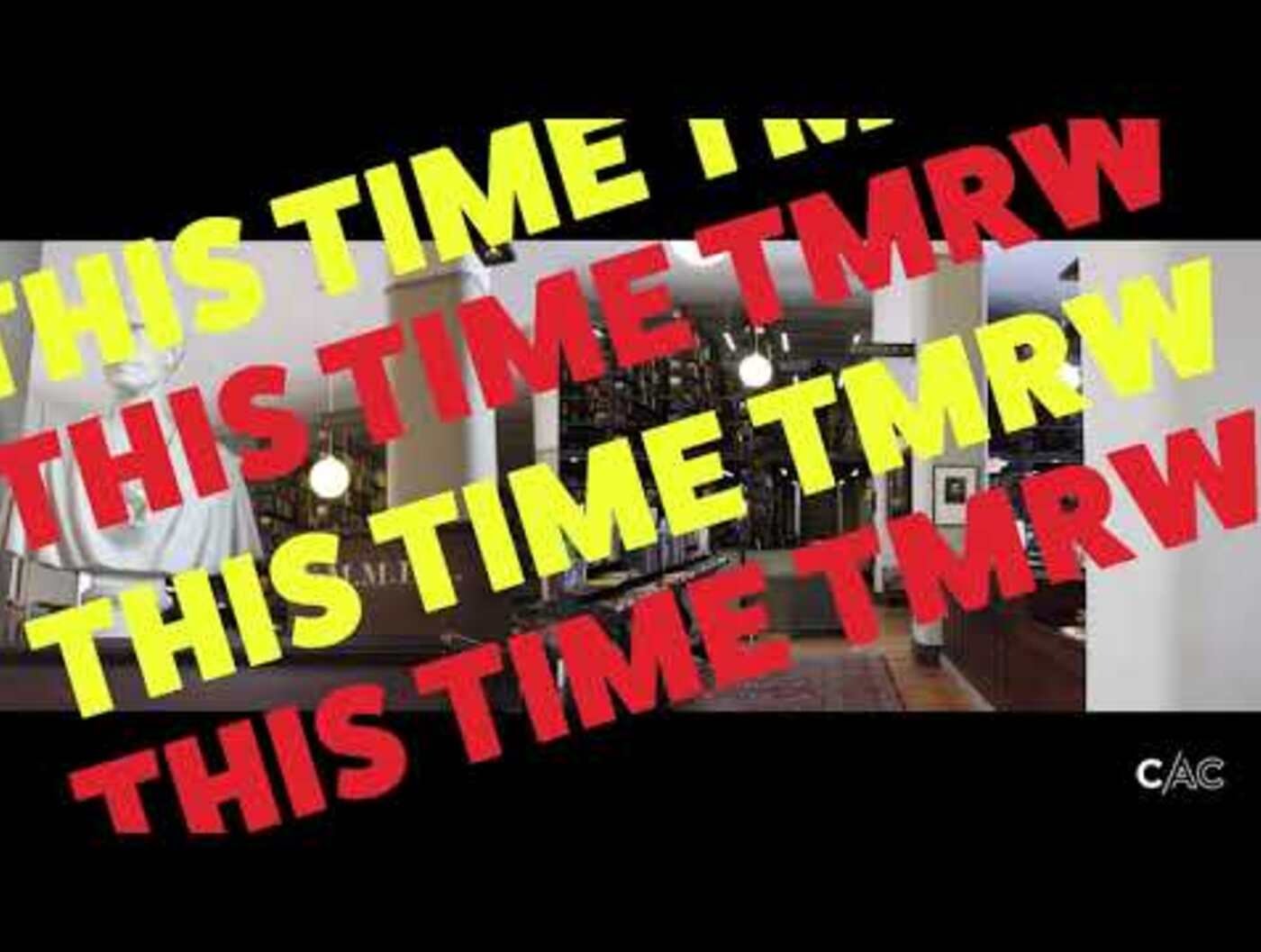 The Contemporary Arts Center’s performance festival, This Time Tomorrow (TTT), returns April 6–10 with multiple CAC commissions and dynamic new work by artists from around the world.

TTT’s discussion series, Goetta-Institut, offers the opportunity to more deeply examine the projects and themes of the festival with the artists and audience members. A playful Cincinnati spin on Goethe-Institut, which encourages international cultural exchange and relations, the Goetta-Institut brings about free, accessible conversations over free, delicious goetta sliders every day from 11:30am-12:30pm at the Art Academy of Cincinnati

From Wednesday through Saturday nights during TTT, the experimentation continues at the festival's Late Night Hub. During these after-hours programs, festival-goers and artists can discuss what they’ve seen, make plans for the next few days, and see more incredible performances, including the regional premiere of Kabareh Cheikhats on Friday, April 9.

Special Collections: Reflections on the Mercantile Library (2022), an unorthodox audio tour of Cincinnati’s famed Mercantile Library, takes listeners on a contemplative journey through the institution’s collection. Focused through an anthropological lens and presented in the form of an audiobook, this piece surveys the human epoch—from the myths of our creation to the realities of our impending demise. Couched within this investigation is an acknowledgment of the most significant mark humanity will leave behind: our collective knowledge.

Special Collections: Reflections on the Mercantile Library explores the notion of an ideal standard by which cultural products are measured, valued, and conserved. It examines the objects and ideas we decide to canonize, the injustices that often impact these decisions, and our inventions of preservation that will ultimately lead to our destruction. Utilizing the library as a mirror, we can see ourselves within the fruits of our labor and curiously ask in the manner of Paul Gauguin, Where Do We Come From? What Are We? Where Are We Going? (1897-98).

In partnership with The Mercantile Library.

Every society has upper and lower strata. For ten years, Brazilian choreographer Alice Ripoll and Cia REC have collaborated together. As Black people living in favelas, the company members of REC are familiar with the Brazilian police’s methods of keeping the poor segment of the population away from the rich by means of control and intimidation. The Portuguese word “acordo” can mean many things – it could be an agreement, for instance, or a wake-up call. In this spelling of the word it also means “the color of”. But what agreement did the social majority make with those regarded as “of a different color”? Are they only seen as a living, breathing cliché, as potential criminals and as cheap labor – or also as people?

The four dancers open up a space with their movements in which other types of encounters become possible. And in which our own reflexes and prejudices come to the surface. How does it feel to suddenly be face to face with those from whom we are otherwise “protected”? And why have we suddenly tightened our grip on our belongings?

Kentucky native Jay Bolotin is a renaissance artist; a maker equally at home crafting outlaw country music and stories as he is creating otherworldly creatures carved from woodblocks, then masterfully animating them into being. In The Darktown Sermons, live song and animation share the stage. A somewhat confused Preacher (voice of Will Oldham, aka Bonnie Prince Billy) descends a ladder from heaven where he visited the angels. They were not what he expected. Back on earth, he seems suddenly able to hear and see where song comes from. A cast of earthly characters inhabit his sermons, including Raggedy Man and Fay (both played live by Ali Edwards of the band, Ruby Vileos).

Bolotin’s songs have been admired and sometimes recorded by many including Porter Wagoner, David Allen Coe, Merle Haggard, and Kris Kristofferson. Bolotin’s recent animation, “The Silence of Professor Tösla,” a collaboration with the celebrated Mexican essayist Ilan Stavans, has won many awards including Best Animation at the Prague Independent Film Festival.

A mosaic of autobiography, mythology, and collective inquiries, Boy mother / faceless bloom combines ritual, dance, music, poetry, video, and sculptural installation to explore transformation and transgression, the creativity and conflicts of motherhood, and ancestral lineage in a time of colonialism, imperialism, and planetary crisis.

The piece was co-created by Juni One Set through an intensely collaborative process over the span of three years. Juni One Set is Eddy Kwon, Senga Nengudi, and Degenerate Art Ensemble’s Haruko Crow Nishimura and Joshua Kohl. Intuitive play, loving conversations, and a deep sense of trust allowed for the generative convergence of diverse artistic practices, cultural backgrounds, gender experiences, age, ability, and geographies.

From the group’s statement: “Our work is intensely collaborative, rooted in the deepest respect and love we hold for one another. Through an intentional, transformational process, we build a world within which we can be free. Our bodies live in fear, in the shadows of beginning-less violence, in joy and in care. Through ritual and embodiment, we find openings for healing and growth and invite others to arrive. We are trying to tell a story we never want to end.”

MORITI is a live performance project of a traveling shack from various locations to different spaces in the city. It is a response and contribution to the ongoing conversation around the notion of displacement and homelessness. The audience is taken into confidence to witness what is for many Black South Africans an intimate ritual, on whose construction their very survival and dignity rests.

MORITI is a project of the Wave Pool Art Space Is Your Space Artist in Residence Program.

In partnership with Wave Pool.

One Giant Step is a performance that uses the melody of “To Be Young, Gifted and Black” as a constraining and liberating force. Channeling the spirit of Nina Simone and her close friend Lorraine Hansberry, performers step through a series of conversations, tutorials, exercises, and musical tasks that lead them, dramatically, to a place of knowing and understanding in real time. With performers and sculptural props dispersed throughout the house, the performance is experienced by the audience as practice and revelation rather than presentation.

Mikrokosmos is the ongoing musical collaboration of Justin Hicks and Steffani Jemison; the subject, form, and material of Mikrokosmos is Black musical study without end.

Can you use choreography to fill in the gaps in our historical memory? In Akal, the final part of his latest trilogy, Radouan Mriziga once again focuses on the knowledge of the Imazighen, the indigenous people of North Africa. Their oral culture was left unrecognized for centuries but, for Mriziga, it is a source of inspiration for the future. Each part of the trilogy is a solo for a dancer and revolves around a mythological female figure who in her own way embodies and passes on the knowledge of Amazigh culture.

In Akal, (Earth in Tamazight language) the ancient Egyptian goddess Neith, the guide for the souls of the dead to the underworld, is central. For this solo, Mriziga has invited the Rwandan dancer, singer and choreographer Dorothée Munyaneza to bring Neith to life. In an intimate setting, you are treated to a mix of rituals, traditional dance, architecture, storytelling, singing, poetry and rap. This fresh look at an oppressed past makes you dream of a more inclusive future.

With this performance, Sharon reflects on her personal relationship with Nina and how her music accompanied all the personal revolutions of her thirties. Sharon also explores how Nina affected her own self-perception of race and gender, and discusses Nina's absence in her life in tandem with Breonna Taylor’s absence; her connection to these two women, her sisters, that she never knew.

With this work, Sharon asks, how do Black women thrive, push, grow, and trust? And how do we rest?

Black Gold: A Lullaby is commissioned by Contemporary Arts Center.

In partnership with 21c Museum Hotel.

In this landmark performance, celebrated Japanese sound artist ASUNA takes battery-powered, analog keyboards and uses them to create waves of overlapping notes: the Moiré effect of superimposed patterns, here used musically. The instruments are placed in the performance space in concentric circles, each with a stick pressing down on a single key to sustain its sound. As each electronic note joins the others, the effect is choral—unceasing voices in a fluid mass of beautiful noise.

How it all sounds varies depending on where you are, but everyone will feel the music slowly build to a climax. The experience of seeing minimalism grow into its opposite one single note at a time is sublime; the layers of complexity increase with every added note, and every moment is a change. In this performance, one stands before a wave of sounds that builds and builds without ever crashing.

From Casablanca comes the surprising hit of Kabareh Cheikhats. Led by theatre director Ghassan El Hakim, 11 actors and musicians pay tribute to Morocco's most famous female traditional folk singers. Both adored but also stigmatized, the cheikhats had an ambiguous position in society. With deep reverence yet wild and infectious flair Kabareh Cheikhats sing, dance and reenact these powerful songs once again: songs of love, rebellion and fierce independence.

Using traditional costumes, make-up and instruments and re-inventing traditions of drag and gender ambiguity, Kabareh Cheikhats create a party night like no other: frenzied anarchy and outrageous fun with a political edge.

American Rescue Plan funds from the City of Cincinnati,
administered through ArtsWave