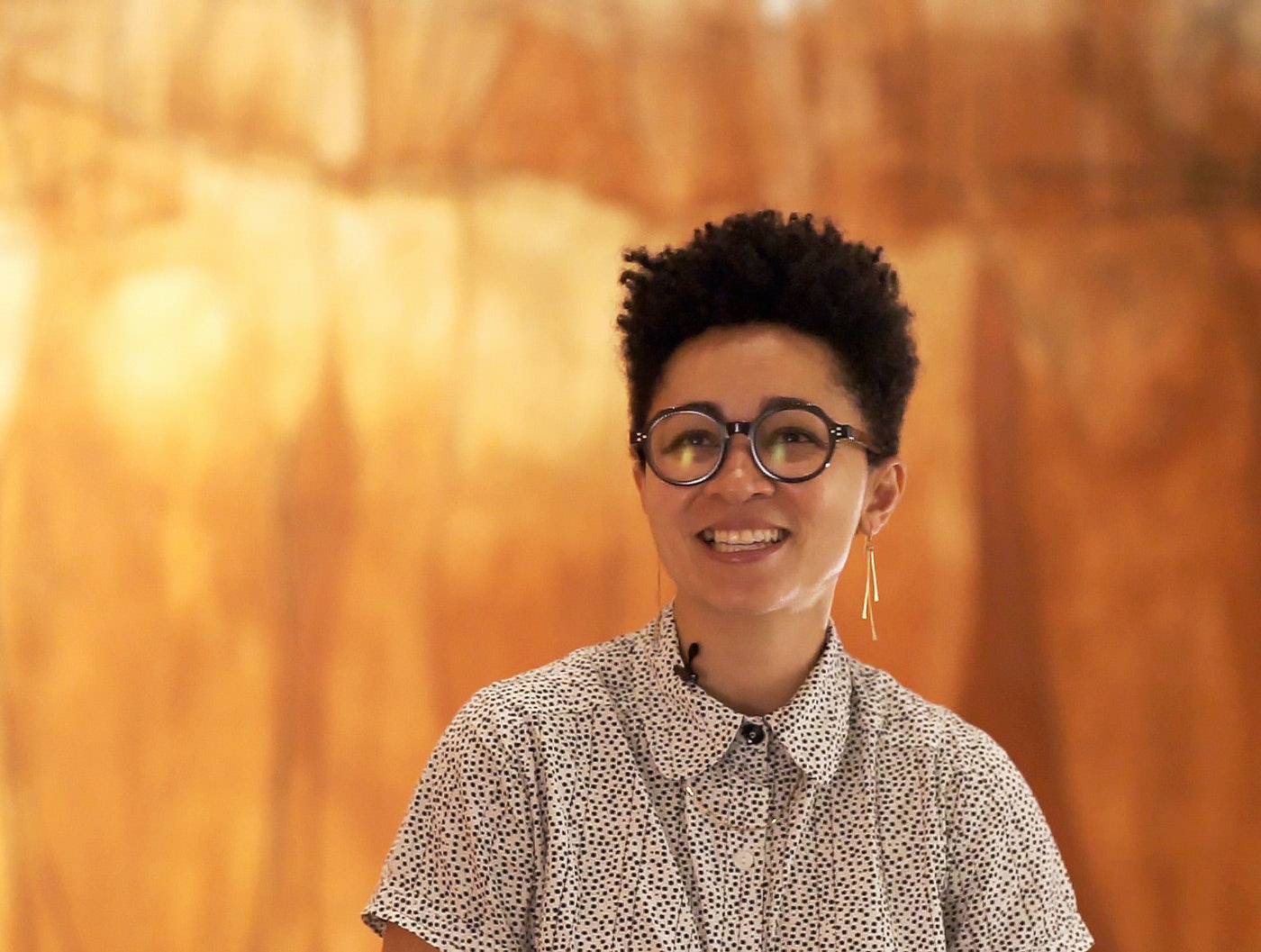 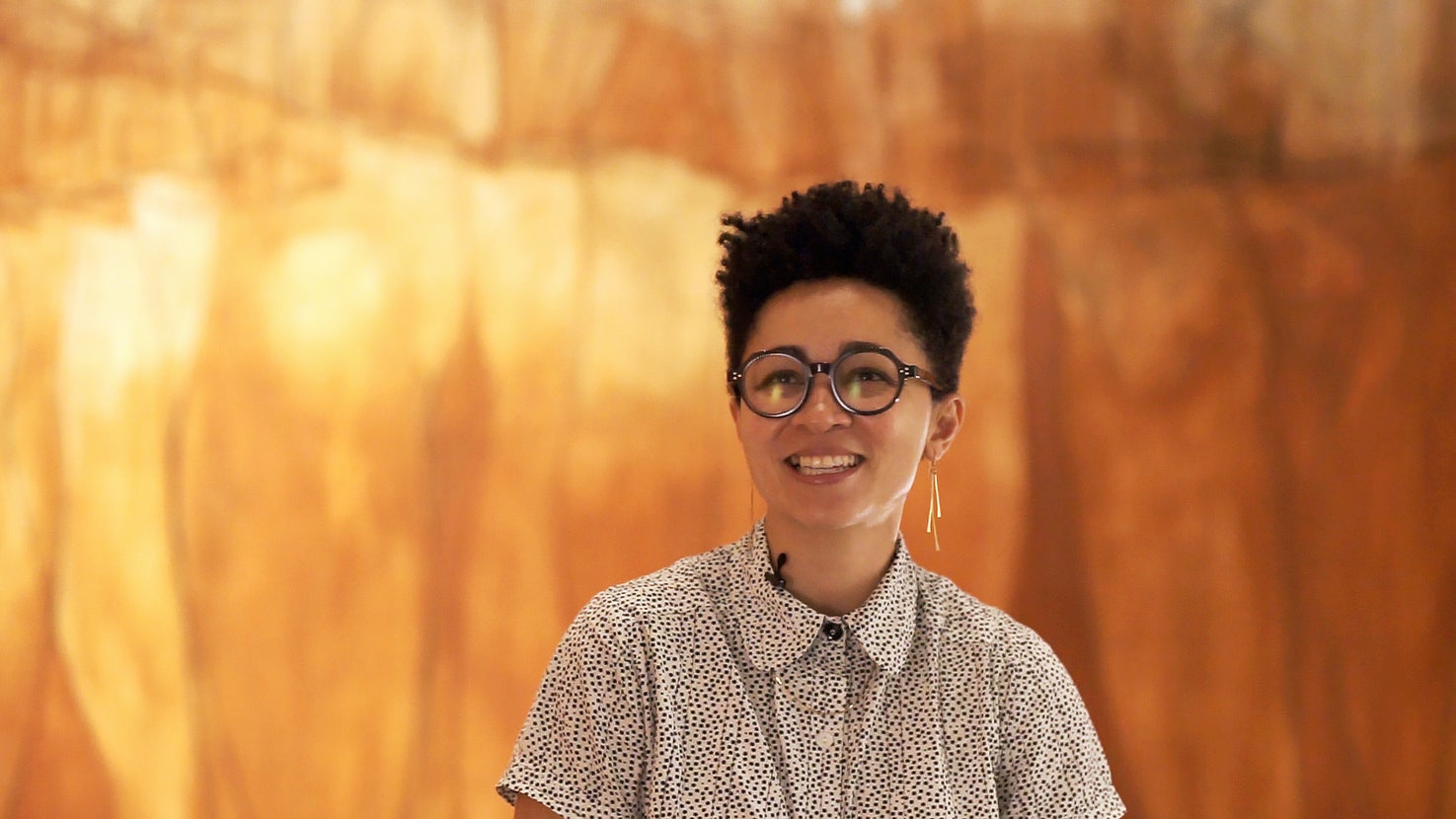 During the install of her CAC exhibition All my seven faces, artist Pamela Phatsimo Sunstrum took a few moments to talk to us about what music inspires her work. Have a listen down below!

I think the recurring theme in this playlist is analog and futuristic—or analog and digital. I think that might be what draws me to a lot of these songs that I need to hear, and I think that relates to the work as well. There's something kind of really traditional and classical about a lot of the visual references that I'm making, whether I'm kind of filtering it or forcing it through this sort of digital futuristic or speculative gaze.

Motel Mari - “Just Like a King”
Motel Mari is a South African band based in Johannesburg. The lead singer, Joao Orecchia, is an artist and musician. He's a good friend of mine, and I just love this project. I love the combination of synth and experimental sounds, which comes from a lot of the artwork that Joao does, and then this solid rock under there.

Outkast - “Spottieottiedopaliscious”
I grew up living in like a lot of different places in the '80s and '90s, so I didn't really get a North American introduction to hip-hop and rap. I went to university at UNC Chapel Hill at a time when Southern hip-hop was really coming up in this exciting way, and Outkast [were] , avant-garde, front-line men of the Southern hip-hop movement. I love [Andre 3000] as a lyricist,—just his way of capturing [the] minute, beautiful, kind of gritty details of life in the South, especially black life in the South.

I like this track—I mean, it's just a good, funky track. I just love that she's got this old lady-like disco vocal sound to her—this crazy, high-pitched falsetto where it almost sounds like she's not going to make it, but she always does. I've heard her perform live, and she's got this out of time sound in her voice, which I love very much. This is a good one for dancing, too.

Little Simz - “Boss”
I mean "She's Such a Little Boss." I love this song, primarily for the words. I love how [the song] comes in, and she's on that megaphone. She's got this huge, brash, kind of unapologetic sound. Her lyrics are hard, and she's kind of a small person, and I love that kind of surprise.

The Comet is Coming - "Super Zodiac"
The Comet is Coming. I love this band. I have just started listening to them, actually. What I love is Shabaka Hutchings—the sax player for this band— and the way he makes the saxophone scream. He's really pushing the limits of the instrument and I really love that.

I'm a huge TV on the Radio fan, loved Tunde Adebimpe, the leader singer. He's an amazing artist. I think he makes drawings and paintings too, and he's also an actor. But as a vocalist, I love the way he performs and the way he sings. He's kind of channeling Jimi Hendrix with that raw, sort of unrefined edge to a lot of the music.

Björk - "Hyperballad"
Björk. Oh my God, Björk. There was literally a time in my life when I only listened to Björk. I was listening to Post and Homogenic on repeat for a year. “Hyperballad” is just a really solid classic for me. I love the way she integrated strings and classical music with punk and electronic synth sounds. I think her voice is crazy, too. She has this classical training in her vocals, but she's always pushing how wide and big her voice can be, and the And I really love that about her singing. She's a very important artist to me, in general.

CAN - "Vitamin C"
CAN was this group out of Germany in the 70s [who] were emulating a lot of '70s roc‚—American rock. I really enjoy that kind of jangly sound. That, and I love the strangeness of the lead singer's beautifully heavy German accent as he's forcing these lyrics into English.

SiR - “D’evils”
I like this song because of the little hook, because of the sample. I think it's a [Billy Boyo sample]. I really like that sample in this.

BADBADNOTGOOD - “Time Moves Slow (feat. Sam Herring)”
BADBADNOTGOOD, they're such a great band based in Toronto. What's so great about this track is the person doing the vocals—that kind of soulful, classic 1970s R&B sound, where it sounds like somebody is going to talk to you for 20 minutes in the track.

Sampha - “Plastic 100°C”
Sampha is this really amazing singer/songwriter who plays the piano. I first noticed him because he used to do vocals on a lot of electronic and dance stuff, like SBTRKT and with Jessie Ware. I like the integration of this sound of something happening on the moon or out in space with just this simple piano riff.

TRESOR - “Aphrodite (feat. Beatenberg)”
Tresor, he's West African, and based in Joburg and he's been doing alot of collaborations with South African musicians. This one is in collaboration with this great band called Beatenburg, they're based in Capetown. The whole album is a nostalgic trip of Afro Pop from the '80s and '90s, and I think it’s a really fun song.

Erykah Badu - “I Want You”
I mean, what else can you say about Erykah Badu? She's the queen of being real and being weird and making beautiful art and music. I love this song for a lot of reasons. My favorite part about the song is really the end, where this weird electric guitar synth thing starts rolling around.

GoGo Penguin - “One Percent”
GoGo Penguin is an amazing progressive, contemporary jazz band. It's just these young guys from London who are extremely talented musicians. I like all of their music, and what I like about this song is how, at the end, it sounds like back in the day when we used to listen to CDs—and the CD would scratch or skip or get stuck. I love that they've kind of emulated that sound. To me, that's super clever and beautiful.