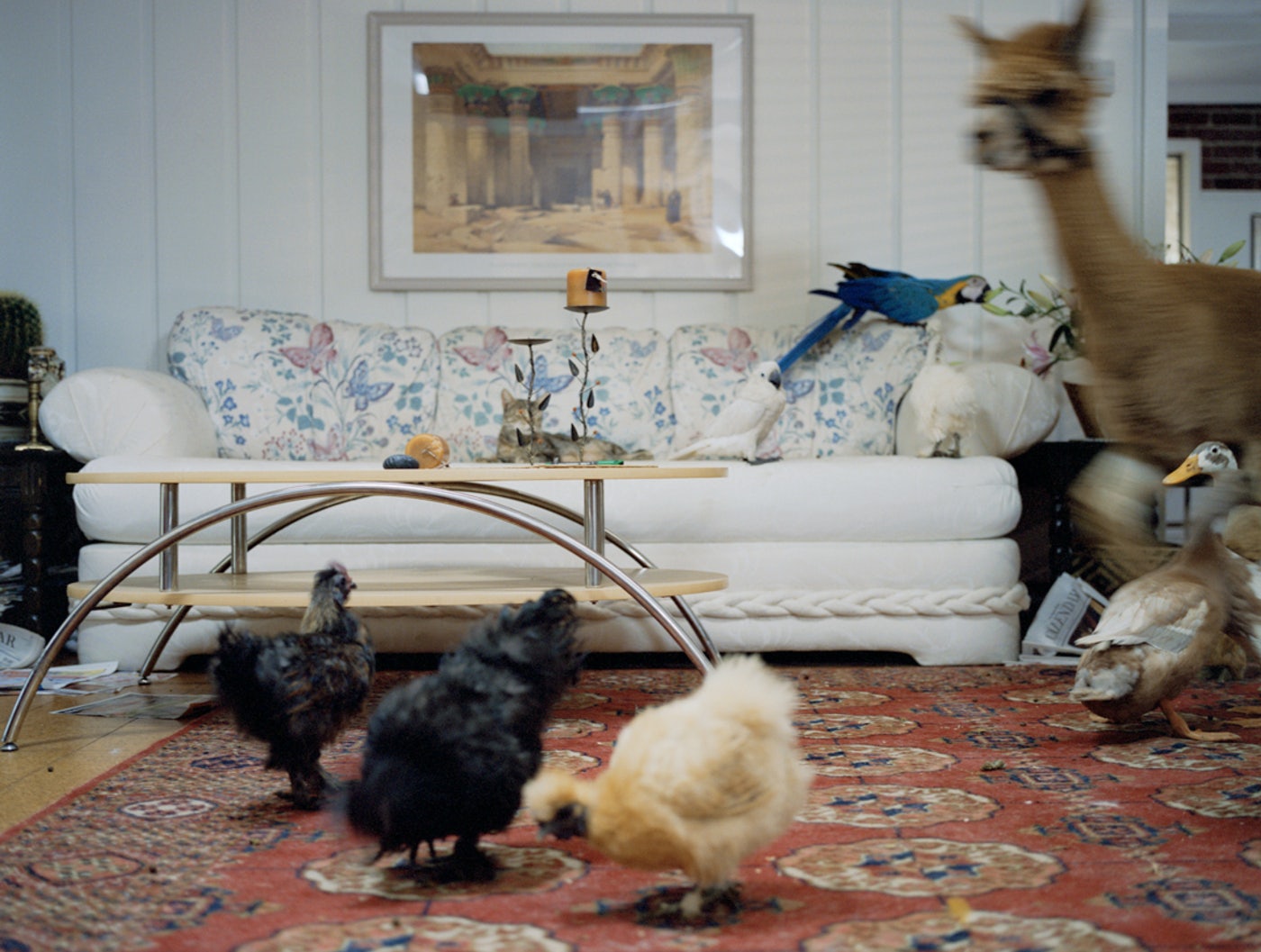 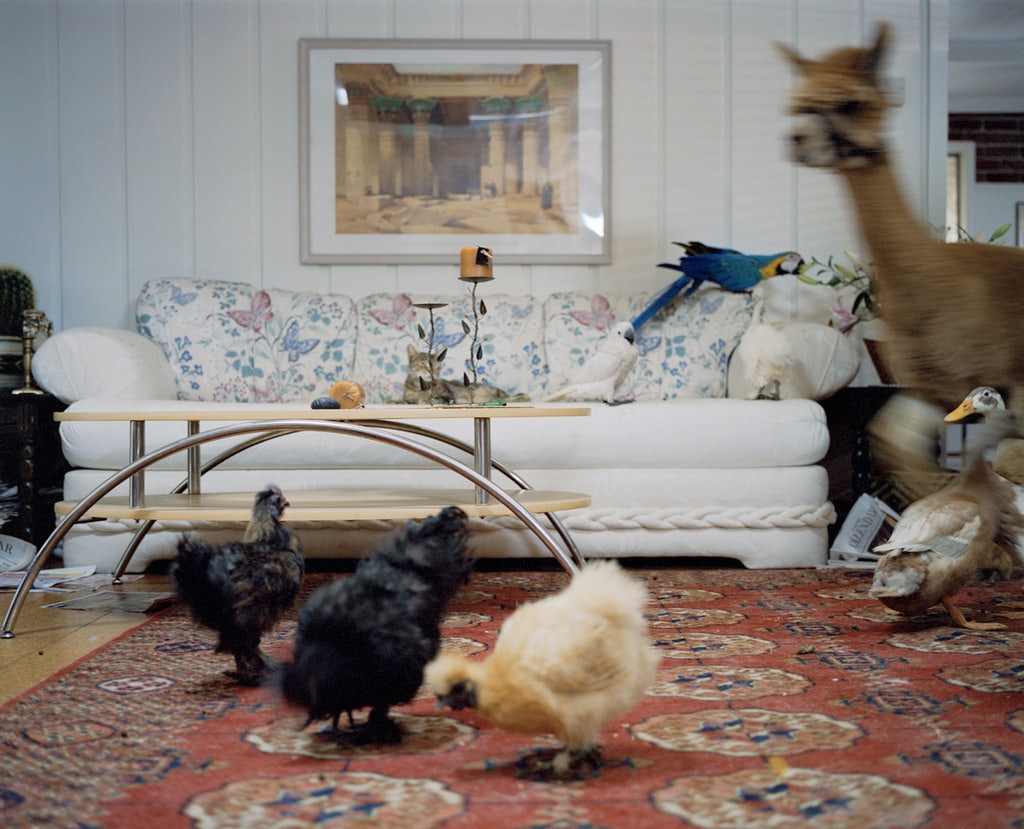 "I am advocating the understanding that earthly heterogeneous beings are in this web together for all time, and no one gets to be Man." (Donna Haraway, When Species Meet, p82)

I write this essay to get pushy about more deeply considering the complicit and multivalent human relationship with co-creatures in this world. I am tugging at the loose threads composing the fabric of human-exceptionalism in an attempt to weaken human-centric constructs of personhood—which always, and only, limit personhood for another.1

Historically, differentiation of humans from other species has revolved around the ability to think and reason. The human as “rational animal” has long claimed a moral and ethical superiority (I.e. power) over our co-creatures. This claim of exceptionalism has led to a culture with severe consequences for non-human people, and is tied to fabricated hierarchical divides within human kinships as well.

The world of art provides space to figure these intimacies in form and image, prodding ethical, metaphoric, and actual relationship(s) with species-kin. Currently, we humans are stuck in a deep and harmful rut of who-counts-as-a-person and what-bodies-deserve-protections; artworks can provide alternate paths and possibilities. If artists are culture-producers, what does it mean, then, to deploy animals in the operation of illustrating existing dynamics (at least), or educating/informing/transforming through poetics (at best) with an artwork? Creatures: When Species Meet, provides rich and lucid provocations to consider current problems and potential in interspecies kinship.

"Our engagement with animals may reveal to us our particular human stupidity, and it is only by deeply attending to animals, or, more precisely, by becoming ‘attuned’ to them, I want to suggest, that we may be able to think otherwise and overcome some of the limitations of our so-called rational condition." (Kari Weil, Thinking Animals, pXVI)

As Weil suggests, perhaps this distinctly Homo sapien rational condition comes with a cost of abstraction and distance—even numbness—to the experience of other types of lives. Here I consider Shimabuku’s video, Then, I Decided to Give a Tour of Tokyo to the Octopus from Akashi. In this exhibition, Tour of Tokyo is the most grievous example of an animal body being used as a prop for human metaphor.2 Tour of Tokyo reads to me simply of a body stolen, enduring suffocation, and eventual release back to its home. My overwhelming experience of this artwork is of witnessing, and painfully feeling, human ignorance and abuse.3 When is a metaphor not worth the sacrifice? 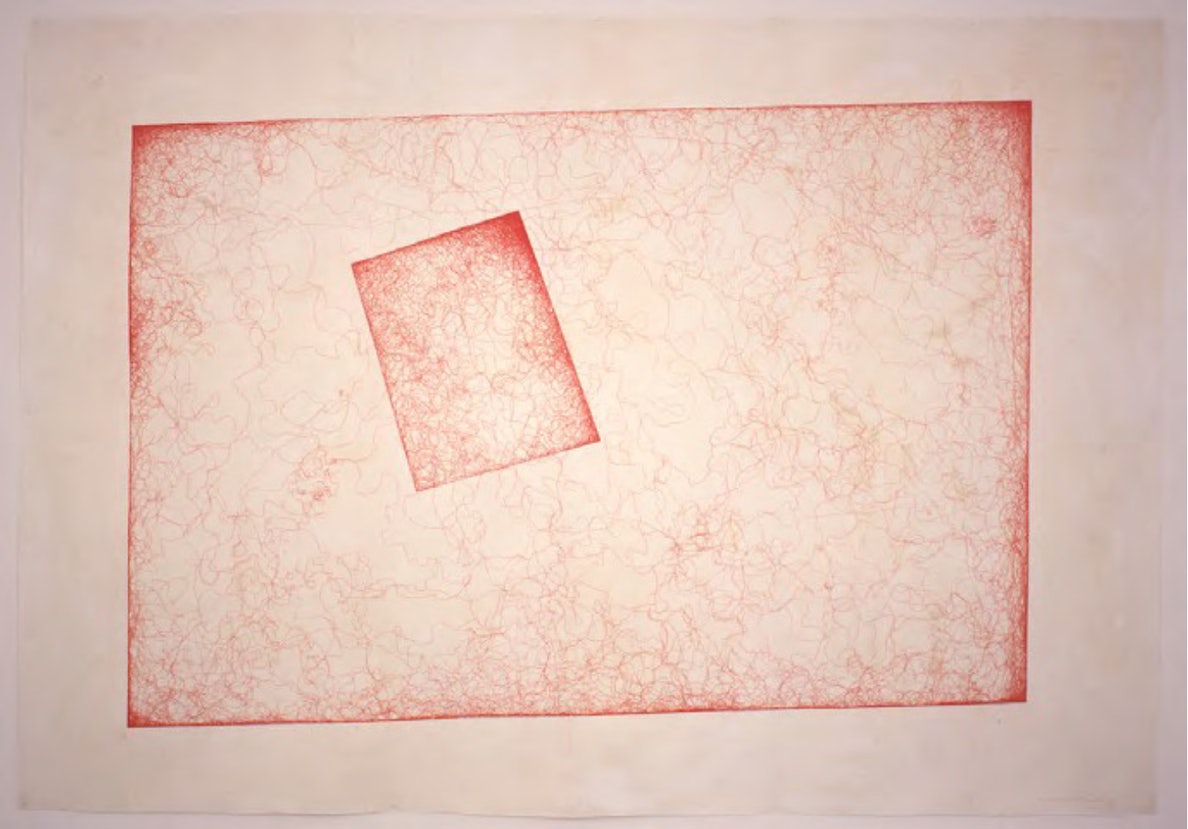 Yukinori Yangai’s artwork, Wandering Position, offers another poignant and troubling set of questions. Here, a single ant’s life and movement is used to present a metaphor of loneliness and isolation. The directed action for the ant is to seek a way out of a floor maze of sorts—hours of wandering in solitude, leaving a carved trail of its lost meanderings. This is a tiny being so socially-wired that its neurological bond to community makes the magnitude of its solitude difficult to imagine.4

This artwork illuminates, for me, my allegiance to my species: how efficiently I can devalue one life in favor of another.5The life of this small insect might be worth the exchange for the impactful metaphor created, right? I don’t feel enraged by the manipulation of the ant’s life experience, but I do feel the power of its solitude. I am stuck with the truth of that dilemma, and left with the trouble. 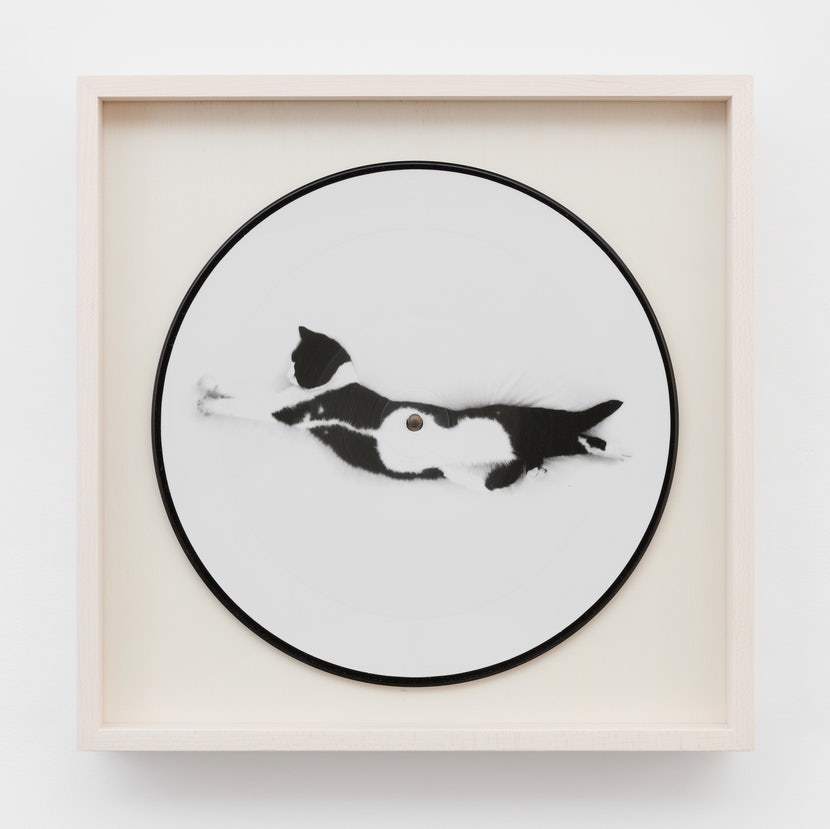 Artworks also generate occurrences of radical, interspecies approaches to kin-making. Within Sophie Calle’s artwork, Souris Calle, the cat is not a prop, but a life-collaborator being honored and grieved by way of portraiture, song, and remembrance: the most common ways we humans grieve our people. In this album and related photographs, Souris’ personhood is made beyond question. The artist honors the depth of her loss and the meaning of that chosen kinship with sincerity, and humor.

Reaching beyond this exhibition, I find Hélène Cixous’ essay, A Refugee, an intimate linguistic and tactical sister to Calle’s work. In manipulating the texture of language itself, Cixous grapples with her questioning of instinctual human bias. The author is able to alchemically bend language in ways that make permeable the cat and human identities, she makes tangible the fact of their attunement. An excerpt:

She guides me on the battlefield: here the bird was knocked over by a giant stroke of the paw. Slumped face down against the ground the animal looked like a huge rat split open twice bigger than itself. With a sharp stroke of my right paw I brought it back to life. The bird took shape again and dashed sideways over here. In the corner behind the sofa. Here the bird lay on its back, one wing folded the other twisted. A cushion fallen upright pretended to shelter it. I pushed the cushion several times with my tail. Here I called you. Come! Come! I called out. I wanted to share my great moment of life. A bird! I called out. I have it! O come, come! I have a bird for you!


‘I committed a crime.’
‘What is it you did? You let her do it?’
‘Well, precisely—I didn’t. I committed a crime of species: I made a human law for mycat [machatte]. As if I had applied the right for me against her. As if my right were mightier than hers, I wronged mycat, I bombarded her right and denied her cat culture.’
I accuse myself.
And in the name of which right? Between cat and bird I took a place, I judged, settled, deprived, decided, granted. I sided with the bird without name and without face against mycat my friend my hairy daughter my sister and my consolation. I forbade death and the life that passes through death. I behaved in everything like a human being with power." (Hélène Cixous, A Refugee, 2003)


In Cixous’ prose, pronoun switching evolves between individuals of different species, the language-act itself conferring the same personhood on the cat, bird and human. Her language itself contorts to embody their interspecies kin-making.

Judith Butler’s essay Violence, Mourning, Politics (2003) has long haunted my heart and conscience, and will always come to mind when considering kinship.

Certain lives will be highly protected, and the abrogation of their claims to sanctity will be sufficient to mobilize the forces of war. Other lives will not find such fast and furious support and will not even qualify as grievable. (Judith Butler, Violence, Mourning, and Politics, p20)

When I encountered Jonathas de Andrade’s video O Peixe [The Fish] at the New Museum in New York a couple years ago, it had a similar enduring impact on my body, heart, and psyche. When I walked into the screening room, before reading the description on the wall, I saw (and felt) this:

"A wall-width video projection of a colorful waterscape, with a single human, fishing in a small boat. After a time (napping, paddling, waiting) he would catch a fish, and hold it while it struggled, and slowly died. This was the recurring sequence: a single man and a single fish. And then a new sequence would begin with a different fisherman, a slightly different boat, a slightly different waterway, the same progression.

After each man pulled the fish aboard, he would pick it up, and hold the large fish firmly against his chest. As the fish struggled to breathe, the camera zoomed in to witness its vibrant, wet, colorful skin; its increasingly bulging eyes as it gasped for breath. Each man had to hold the fish tightly, muscles visibly tensed with the struggle required to keep the fish held to their chest. Then they would stroke the fish, sometimes putting a cheek down against the fish’s body. The video would switch to the next sequence anticipating the final breath—but after the fish’s gasps slowed, its color faded, and its fight became less fierce.

Each man held and stroked the fish with distinctive body gestures: some tender, others more mechanical. It became clear after several sequences that either this was a local ritual, or the artist must have scripted these actions. When I recognized this, I didn’t care about the authorship or script. I cared about the parallel worldly images that were arising in my mind that brought tears to my eyes and a sob in my throat. This was early 2017, and I was holding the recent murders and images of Eric Garner, and Sam DuBose, Michael Brown, Treyvon Martin, Sandra Bland, and Philando Castile.

The video had me imagining these murders happening differently: each officer holds the body they pulled from life, close to their heart; stays with the trouble, the violence, the death they have enacted." 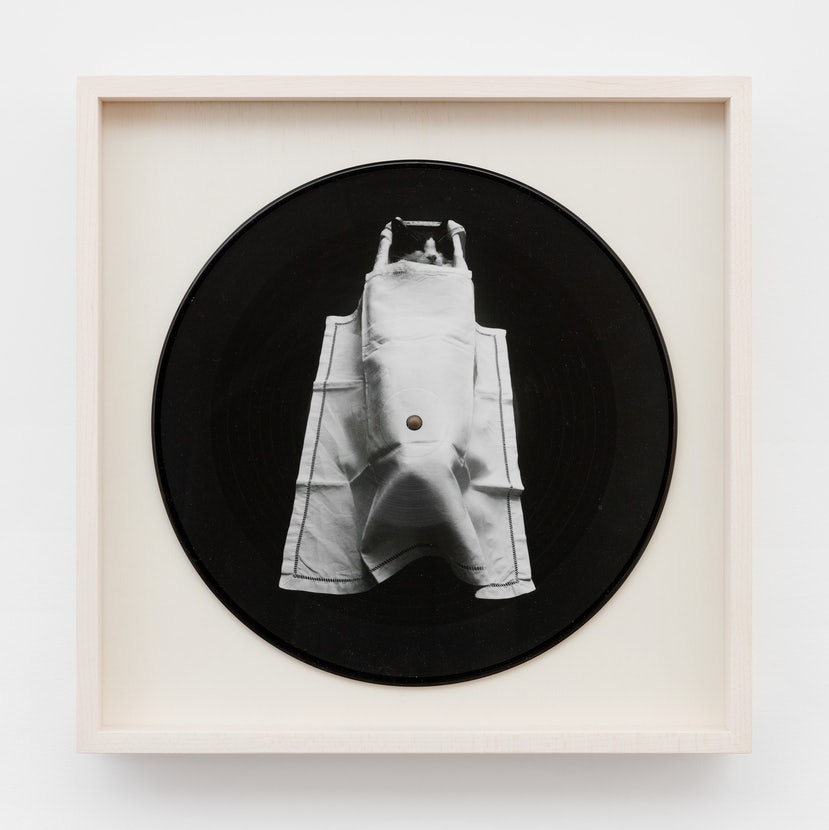 There are times when the impact of an artwork, an essay, a poem, can create change, open minds, impel empathy, and even stir-up transformation. Difficult artworks challenge us to stick with the trouble, and let the trouble mix with our vulnerable selves, and shift things around.

Creatures: When Species Meet, and the space of art, offer opportunities for attunement, increasing our awareness of the myriad implicit biases underlying daily decisions. These decisions make our world. Who are your kin? Whose lost-lives cause your grieving? Why these, and not others? Awareness comes with the opportunity either to perpetuate, or to shift these kinships. Let’s recognize the world-building these choices knit.