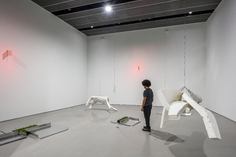 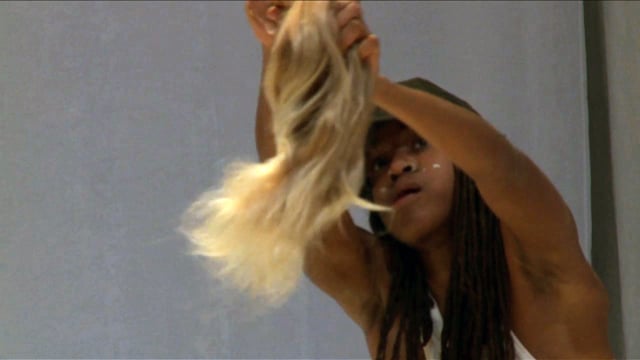 Per the artist's request, the doors will close at 8PM. Because of the intimate physical arrangement of the theatre, there is no admittance after the doors have closed. Please feel free to arrive early and enjoy a drink at Collective CAC.
For you convenience, you can also take advantage of valet parking ($6 for CAC members / $8 nonmembers).

As a child, Dana Michel would drape a yellow towel on her head in an attempt to emulate the blonde girls at school. As an adult, she now revisits the imaginary world of her alter-ego in a performative ritual free of cover-ups or censorship. Blending austerity and absurdity, she digs into black culture stereotypes, turning them inside out to see whether or not she can relate. We witness her allowing a strange creature to emerge from this excavation in a slow and disconcerting metamorphosis that we follow with fascination.

Strongly influenced by the aesthetics of fashion, music videos, queer culture and comedy, Dana Michel quickly stood out as an emerging dance artist. With Yellow Towel, which was developed in Vienna, Brussels, New York, Toronto and Montreal, she explores new creation territories and most decidedly asserts herself as an artist to watch.

“Michel embarks on a performance that is richly textured, full of nuance and shift: this is a study of a human soul. When she does speak with words the sentences are dotted with random thoughts that seem like external manifestations of internal monologue and dialogue. She’s working on the detail of the sound, how to stress a word, the meaning of the rhythm of what’s said. It’s fascinating territory.” - The Dance Current