Robert Colescott’s paintings evoke powerful emotions and thoughtful contemplation – engaging themes of race, gender, and social inequality. His art is both highly charged and intrinsically beautiful. In 1997, Colescott was the first African American painter to have a solo exhibit at the Venice Biennale in Italy. His work is in the permanent collections of many museums, including the Museum of Modern Art, the Metropolitan Museum, the Seattle Art Museum, the Studio Museum in Harlem, and the Oakland Museum.

Colescott was born in 1925 in Oakland, California, where his father was based as a Pullman porter. The politics of race and social justice were central to everyday life in Colescott’s experience of this city. Both of Colescott’s parents were accomplished musicians who played jazz, blues, and classical music.

Colescott left Oakland to fight in the 86th Blackhawk Division during World War II. He returned to the Bay Area and the University of California at Berkeley, on the GI Bill, and earned his B.A. in 1949. After receiving his degree, he spent a year in Paris at the Atelier Fernand Leger and then came back to Berkeley, earning an M.A. in 1952.

In 1964, he spent a year as Faculty Artist in Residence at the American Research Center in Cairo - prompting a period of transformation as his work grew more graphic and explicitly political. Colescott received international recognition for his satirical re-envisioning of American history in paintings like George Washington Carver Crossing the Delaware (1975). Later work brought together personal issues with political life, like the 1992 painting A Fool There Was, Europe—Africa.Robert Colescott passed away in 2009. 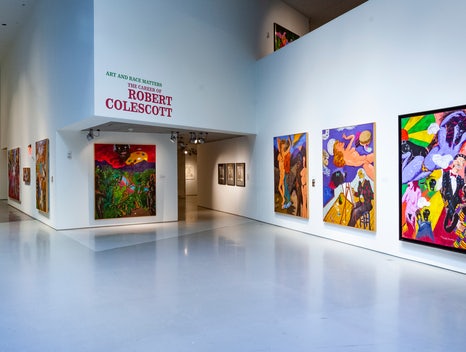 The exhibition explored his oeuvre through issues such as the American Dream and assimilation aspirations, mass media imagery, notions of beauty, sexual and gender transgressions to name a few.